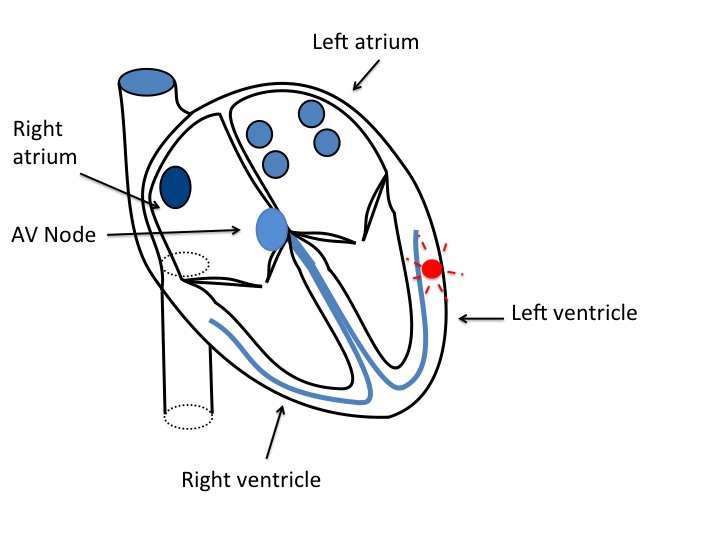 Usually, the heart’s muscular pumping chambers (ventricles) are made to contract by an electrical wave that starts in the sinus node and washes down from the upper chambers in the heart (the atria), via a junction box called the AV node, and via specialised cells which carry the electrical impulse rapidly to the ventricular muscle (the “His-Purkinje system”) – see upper image.

Sometimes the heart beat can originate instead from the muscle cells within the ventricles themselves. This means that there is less regulation as to how quickly the heart can go (usually the AV node will prevent the heart from going too quickly when the heart beat originates from somewhere above it).

This faster rhythm is most commonly a regular rhythm called ventricular tachycardia (lower image). This can occur in people with an otherwise normal heart, and in this situation the faster rhythm may lead to symptoms but is not usually dangerous. Symptoms include palpitations, shortness of breath, chest tightness and dizziness.

There are other situations in which rhythm abnormalities (arrhythmias) arise from the ventricles when the heart is in some way abnormal. If the heart’s pumping function is severely reduced then there is a higher risk of arrhythmias. There may also be a higher risk of arrhythmias when there is an inherited condition affecting either the heart muscle itself or the tiny channels within the heart muscle cells which regulate the electrics of each heart beat. In these circumstances, the concern is that the arrhythmia could be sustained or could lead to a cardiac arrest. Risk assessment is needed and an implantable cardioverter defibrillator (ICD) may be recommended. Catheter ablation may also be appropriate.

I genuinely can't say enough about Dr. Ginks. Having been diagnosed with a genetic heart condition, I went through countless numbers of doctors, both public and private, across the UK, Ireland, and the US. But it wasn't until I came across Dr. Ginks that I had a true benchmark to measure every other doctor against. The level of service, care, and information I received was absolutely incomparable. If there was a doctor like Dr. Ginks out there for everyone, we would all feel much more comfortable with our outlook and the care that we, and our loved ones, are getting. He's an absolute credit to his profession.