The technology we use in medicine is always evolving. Since I started working in the field of heart rhythm management, there have been incredible advances in the equipment and computer technology, which have revolutionised our ability to treat patients.

When dealing with complex heart rhythm disturbances, one of the treatment options is catheter ablation. We can use 3D mapping systems to superimpose anatomical and electrical information onto a 3-dimensional shell of the relevant part of the heart, usually the specific chamber where the rhythm is coming from.

An example is shown here. Fine catheters are passed to the heart from the blood vessels at the top of the leg, using a keyhole technique. We can then reconstruct the shape of the chamber in question, and acquire multiple timing points within the chamber in order to work out how the rhythm disturbance (or “arrhythmia”) is happening. The timing points are colour-coded by the system to show the sequence in which the rhythm passes across the chamber (red – orange – yellow – green – blue).

In this example, the left atrium (upper collecting chamber) is shown. The area coloured brown represents an area of scarring. The circuit causing the arrhythmia is passing through this area of scar, and then passes around each area in a “figure of eight”. You can identify this if you follow the colours in order (red – orange – yellow – green – blue). A single localised burn between the areas of scar was enough to stop the faster rhythm and restore the normal rhythm, leading to the patient’s symptoms being resolved. 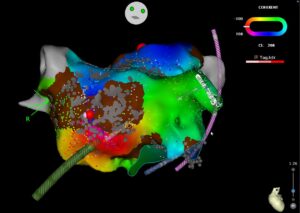 I am delighted that we have now started recruiting patients in a new research study at the John Radcliffe Hospital in Oxford. The study is called CAPLA and is being carried out in conjunction with colleagues in Melbourne, Australia.

The study is designed to enhance our knowledge regarding the optimal strategy to perform catheter ablation for patients with persistent atrial fibrillation. That is, people who have atrial fibrillation (AF) which carries on for longer than 7 days at a time or have needed DC cardioversion to restore the normal rhythm. The cornerstone of catheter ablation for AF is to achieve electrical isolation of the pulmonary veins, which bring the blood back to the heart from the lungs. The aim of the study is to find out whether additional treatment to isolate the posterior wall of the left atrium improves the success rate of this procedure. Whilst single-centre studies have suggested there may be benefit from this approach, the hypothesis needs to be tested out in a randomised clinical trial before we should consider changing routine practice.

Who is eligible to take part? Anyone who is scheduled to undergo catheter ablation for persistent atrial fibrillation for the first time may be a candidate to take part in the study. As with any clinical trial, there is a list of inclusion and exclusion criteria, which the clinical and research team will go through in detail.

The study details can be found online here.

Hybrid AF ablation (also known as the “Convergent Procedure”) is a two step approach to treating patients who have been in atrial fibrillation for a longer period of time. A cardiac surgeon carries out the first step, using a minimally invasive approach. A cardiologist (cardiac electrophysiologist) carries out the second step, usually around two months later, using conventional catheter ablation techniques.

We are proud to have started delivering this treatment in Oxford this year, with our first patient having completed both steps and a three month follow-up, at which he remains in sinus (normal) rhythm and feels fantastic!

Who is this suitable for?

The hybrid approach tends to be reserved for patients whose AF is considered more challenging to treat using conventional catheter ablation alone. Factors which tend to make AF more difficult to treat (i.e. the success rates are lower) include longstanding AF which has been persistent for over one year, an enlarged left atrium (the chamber which AF tends to originate from), obesity, impaired pumping function of the heart and those who have had unsuccessful catheter ablation procedures. This treatment is indicated according to the 2017 HRS expert consensus statement on catheter and surgical ablation of atrial fibrillation. This has also been approved by the Technologies Advisory Group at Oxford University Hospitals NHS Foundation Trust.

Which technology is best for catheter ablation of paroxysmal AF?

Paroxysmal AF is defined as AF that comes and goes on its own, lasts for less than a week and typically does not require cardioversion.

Once stroke risk has been quantified and addressed (with anticoagulation where necessary), the goal of treatment is primarily to improve the symptoms which the AF causes. These can include palpitations, shortness of breath, fatigue, lethargy and dizziness. Typically we try medications in the first instance (either regularly or as needed – “pill-in-the-pocket”). However these medications often do not abolish symptoms and then catheter ablation is considered.

In around 95% of people who have paroxysmal AF, this originates as a result of ectopic beats originating from the pulmonary veins, which are extra electrical impulses which trip the heart up to go out of rhythm; this was originally described in the late 1990s. This led to a treatment strategy called pulmonary vein isolation. The intention of this approach is to cause deliberate localised damage to the wall of the heart where these extra electrical impulses come into the heart so as to stop them from being able to trigger AF.

You can read more about this in the catheter ablation of AF section.

The two predominant strategies we use in order to isolate the pulmonary veins are radio-frequency (RF) ablation and cryo-ablation. RF ablation involves causing small localised burns whereas cryo-ablation involves freezing the part of the heart (in this case, the left atrium) allowing AF to occur. These two strategies were compared in a randomised head-to-head trial called FIRE AND ICE which was published recently.

This study demonstrated that the two technologies are equivalent in terms of their safety and effectiveness, so both approaches are reasonable options for catheter ablation in patients with paroxysmal AF.

I have just returned from the British Cardiovascular Society (BCS) annual conference in Manchester. I was asked to present the findings of a multi-centre randomised controlled study on catheter ablation of persistent atrial fibrillation in the patients with heart failure, the AATAC-AF study.