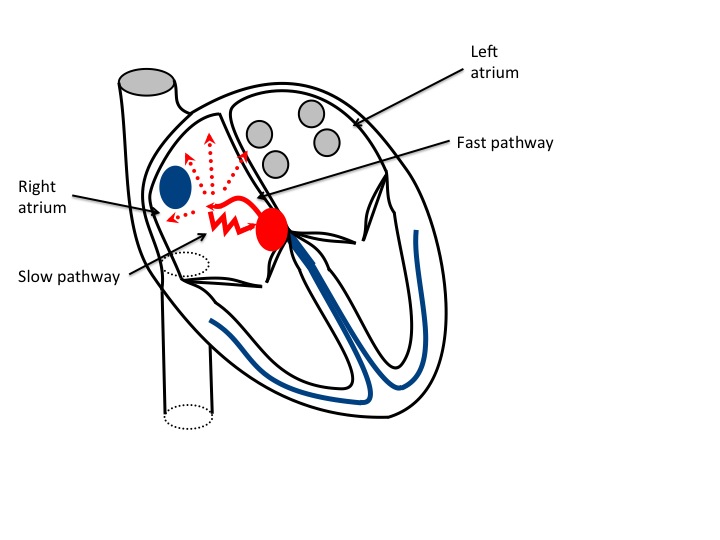 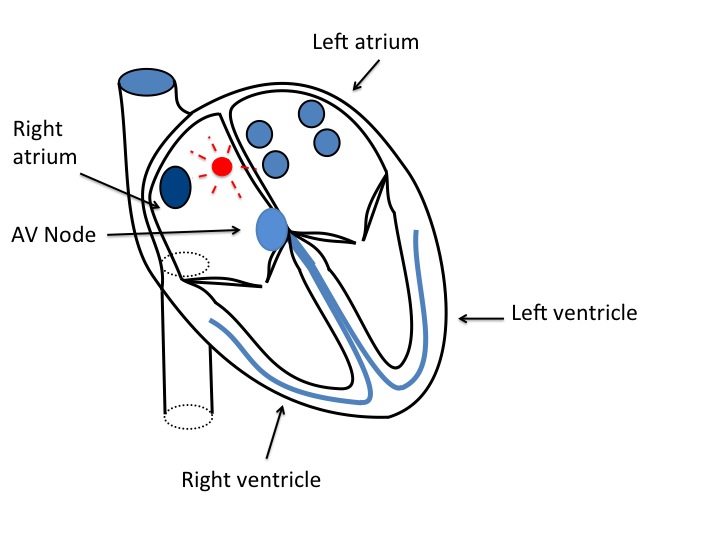 Supraventricular tachycardia (SVT) is an umbrella term for any faster heart rhythm that comes from above the pumping chambers in the heart (i.e. the atria – collecting chambers – and the junction box which connects the upper and lower chambers, the AV node).

Whilst technically AF and atrial flutter are both SVTs, the term SVT usually refers to one of three heart rhythms. These are all potential causes of troublesome symptoms such as palpitation (awareness of the heart beating quickly), shortness of breath, dizziness and chest tightness in association with a much faster heart rate than usual, although they are not usually dangerous.

1) Atrio-ventricular nodal re-entrant tachycardia (“AVNRT”). This is the commonest form of SVT and affects women more commonly than men. In around 25% of people there are 2 connections rather than one in the AV node. This allows a “short-circuit” to form which causes the heart to beat much more quickly than usual (see upper panel).

2) Atrio-ventricular re-entrant tachycardia (“AVRT”). This is the second most common form of SVT and relies on the presence of an additional muscular connection (“accessory pathway”) separate from the AV node. This allows an electrical circuit to be formed which uses the AV node to conduct the impulse in one direction and the accessory pathway in the other (middle image).

3) Atrial tachycardia. This refers to a faster rhythm coming from a single point or a larger circuit within one of the upper chambers of the heart (lower panel). This suppresses the normal (sinus) rhythm which intrinsically has a slower rate.

Treatment options for SVT include:

1) Taking a conservative approach, i.e. no medication, and using techniques such as the Valsalva manoeuvre, or putting one’s face in ice-cold water to stop an episode

2) Either as and when (“pill in the pocket”) or regular medication.

3) An invasive approach to diagnose and treat SVT, which is called a cardiac electrophysiology study with a view to catheter ablation.

I have very much appreciated your taking the time to explain my condition and the treatment to me in such detail and also to answer any questions as they came up. Thanks to your support I felt confident about the level of care and treatment I was receiving before and during the procedure.
Thank you again for your kindness, treatment and support.